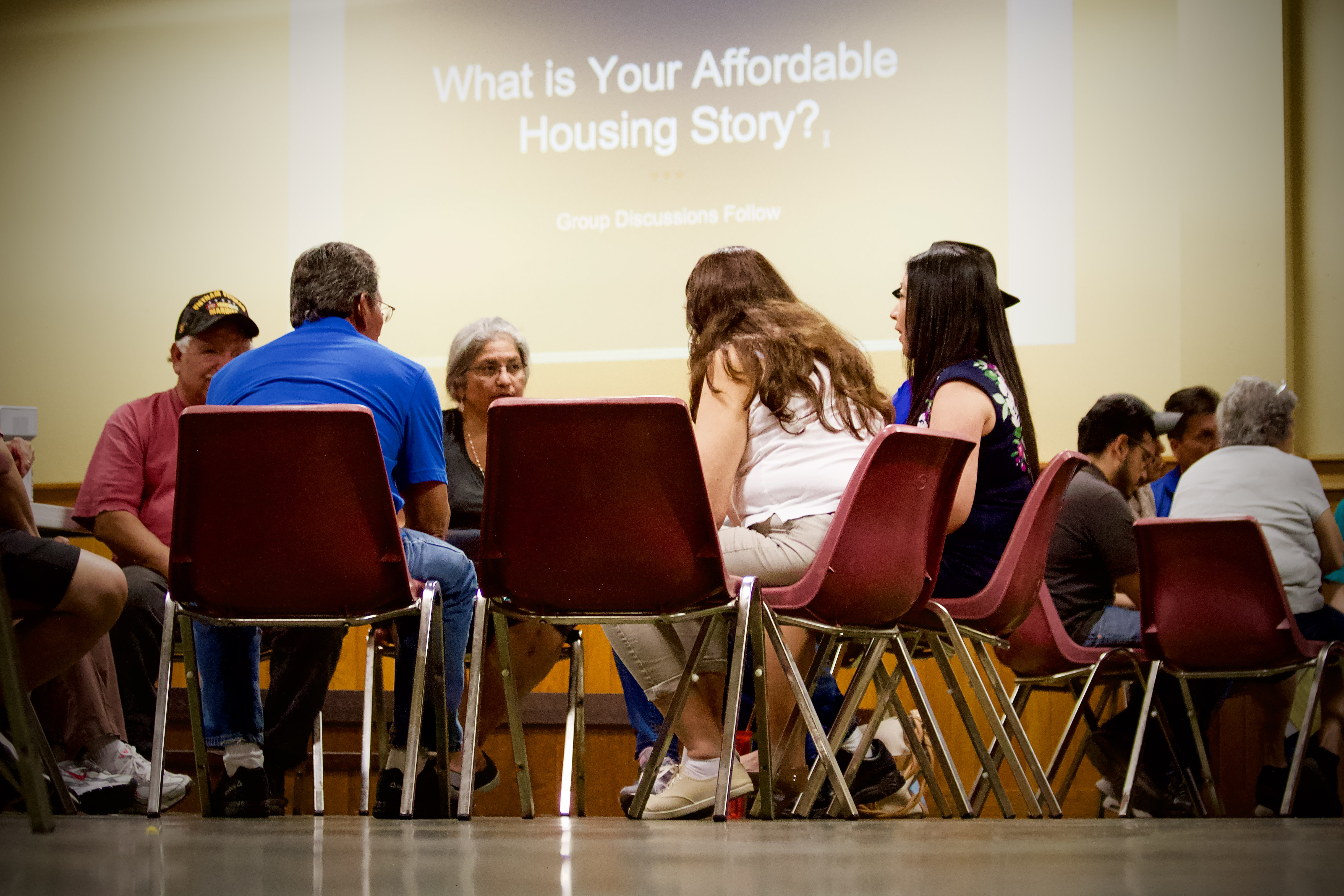 Hosted by Our Lady of Guadalupe Catholic Church and the Austin Interfaith Affordable Housing Team, a civic academy on codeNEXT (a proposed overhaul of the city's zoning code) drew 120 mostly East Austin residents to learn, share housing stories and identify opportunities for concrete action before the City Council votes on it.

Building on a groundbreaking accord between Dallas Area Interfaith (DAI) and the Police Departments of Dallas, Carrollton and Farmers Branch -- in which the police agreed to accept parish identification cards as alternative ID -- upwards of 800 parish ID cards have been issued since the campaign was launched four weeks ago.  With some parishes requiring active membership from applicants for at least six months before issuing the card, the waiting list of submitted applications has, so far, exceeded 2,000 applicants and is expected to grow.

This joint effort with the Catholic Diocese is bringing immigrants out of the shadows and into fuller participation in congregational life.  700 applicants were newly registered as members of their parish, even after years of regular church attendance.  Teams of leaders identified by DAI, and trained (in Spanish) through a collaborative effort with the Catholic Campaign for Human Development (CCHD) and the Interfaith Education Fund, are helping keep the cost of the parish IDs affordable for families.

Without an ID, said one parishioner, "we are scared of what could happen if we are stopped by the police." With parish ID, families are feeling a greater sense of belonging and confidence in dealing with law enforcement.

In training sessions held this month, police departments have committed to training their officers to recognize these cards as alternative identification. 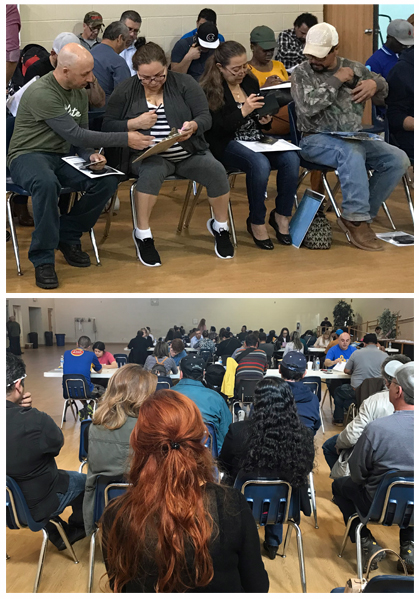 One hundred sixty-six Legal Permanent Residents participated in a citizenship workshop organized by Arlington Mansfield Organizing Strategy (AMOS) and Catholic Charities of Dallas in which they obtained legal advice about their individual cases.

Hosted by St. Joseph Catholic Church in Arlington, Texas, this workshop is part of a larger effort to prepare over 1,000 long-term residents to become US citizens and become engaged in public life. 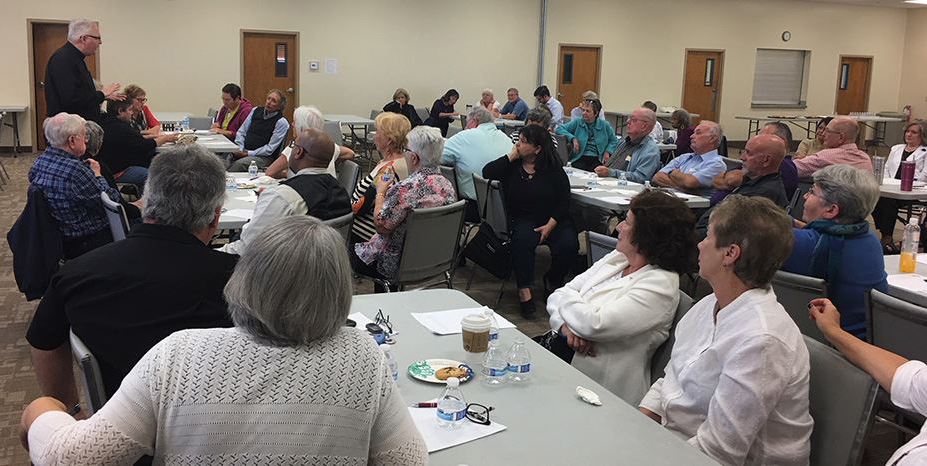 Fifty members of Santa Catalina organized a listening session, and two rounds of house meetings, with their pastor, Fr. Larry Sanders, C.SsR.  In the conversations, stories emerged about the opioid crisis, education, immigration, and family issues. The session was hosted and facilitated by the parish council which plans to work with Fr. Larry to address the issues raised. 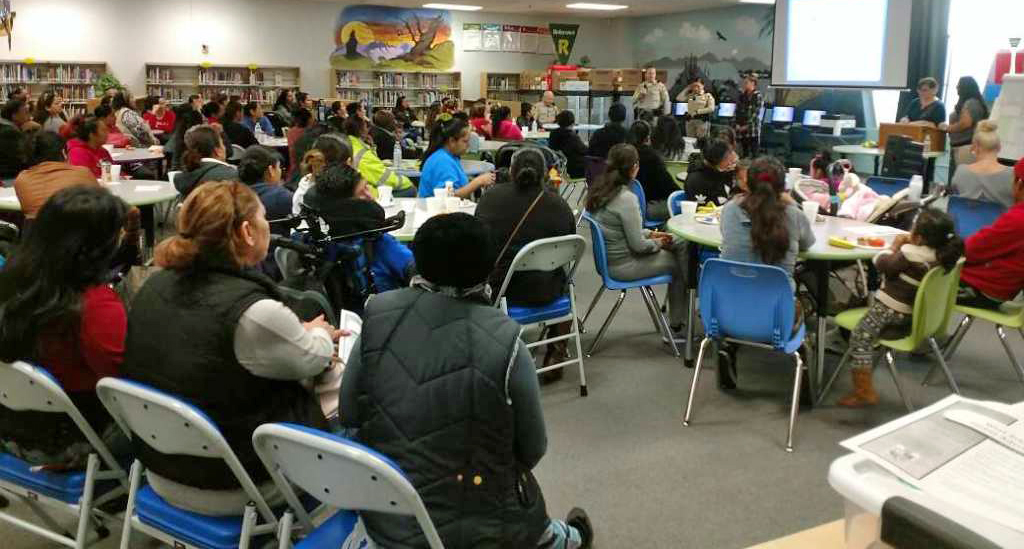 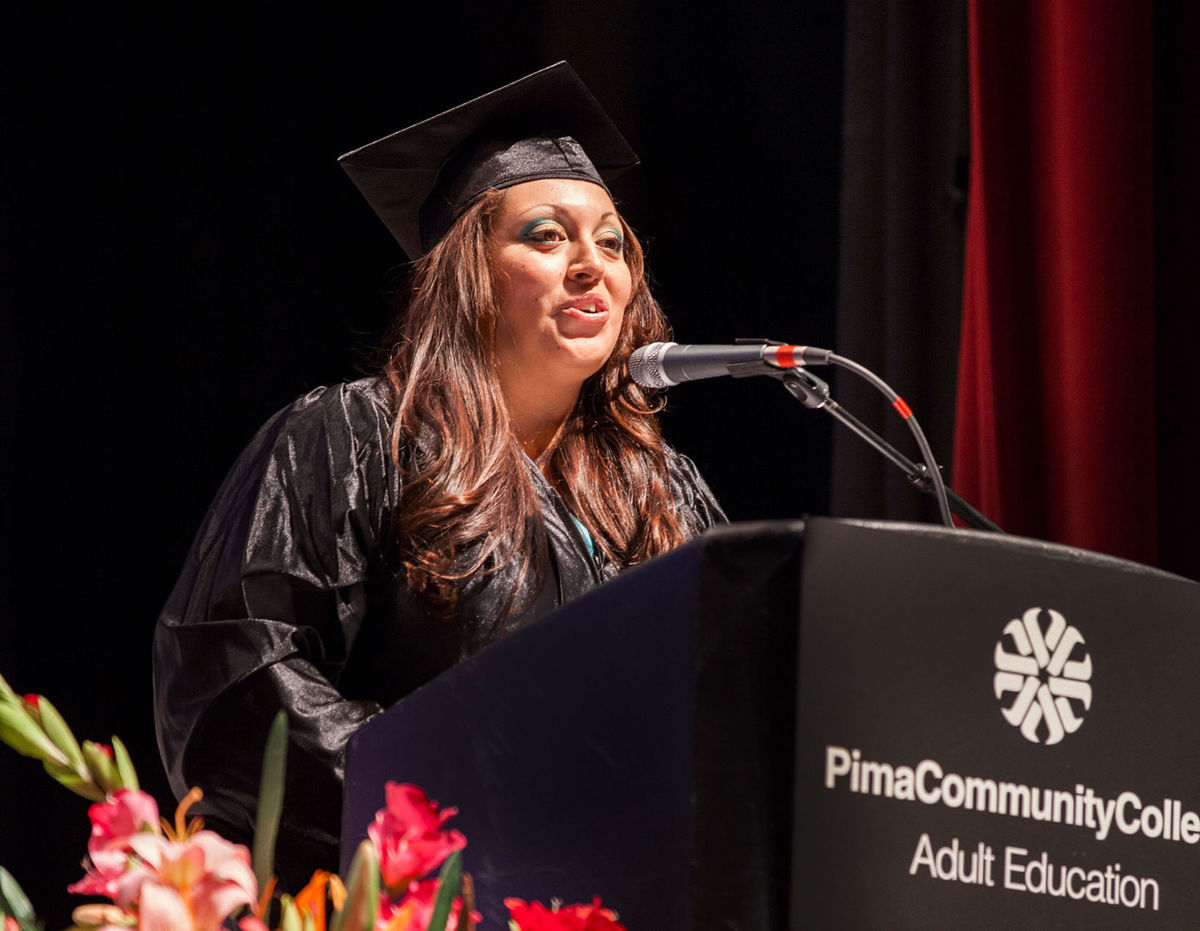 As a leader with Pima County Adult Education, Ana Chavarin started out with Pima County Interfaith in a 2013 accountability assembly telling her story.  Now she is an organizer, working with institutions to build power in Tucson, Arizona. 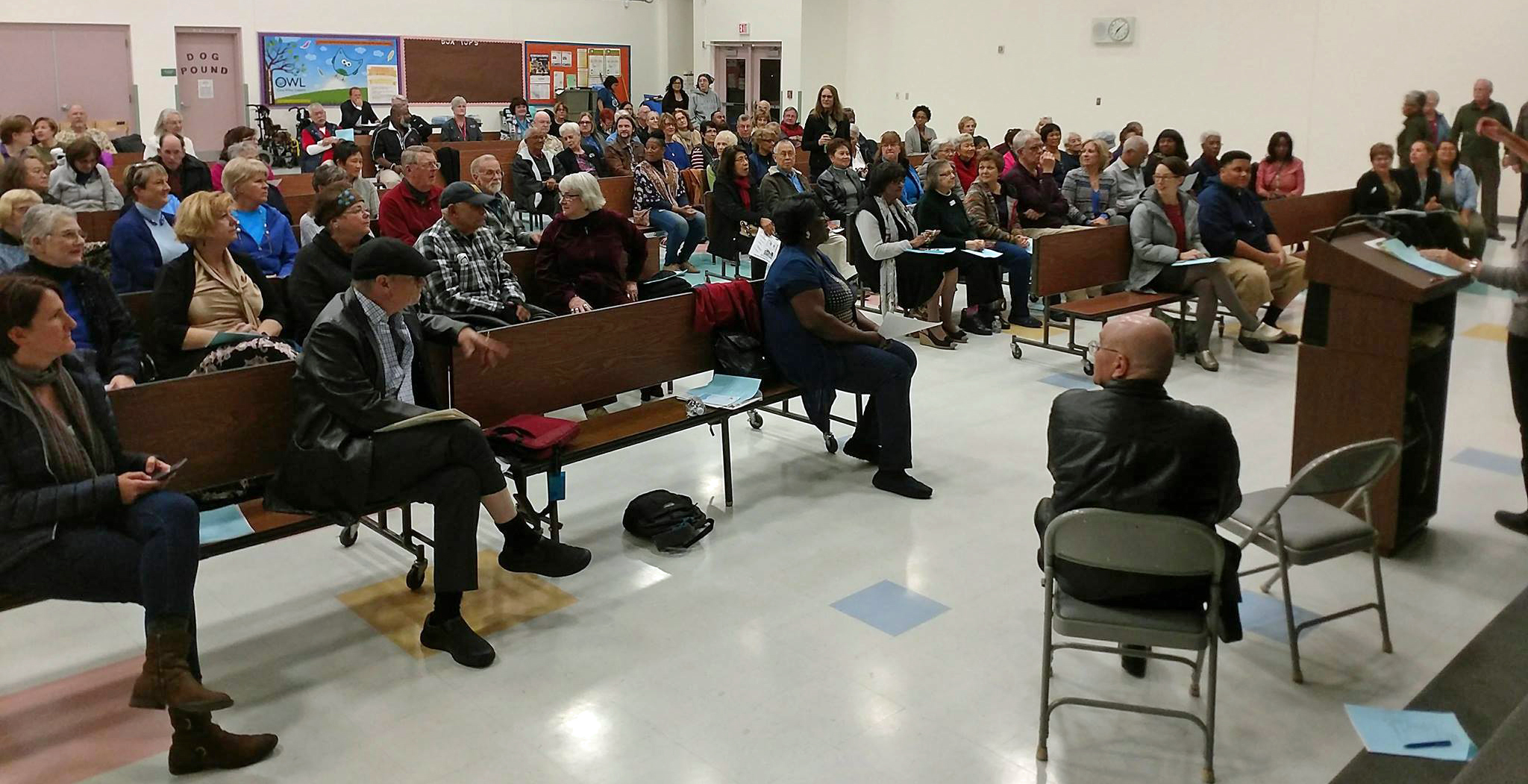 140+ leaders from Nevadans for the Common Good (NCG) participated in their most recent Delegates' Assembly, marking the end of a House Meeting Campaign that involved over 150 small group conversations and the beginning of taking action.   Since October 2017, leaders spoke with over 1500 people around Clark County and, based on these conversations, presented the five issues they want to work on: healthcare, education, transportation, immigration, and housing.  Leaders also exchanged funny skits, stories, and a few dance moves in the process! 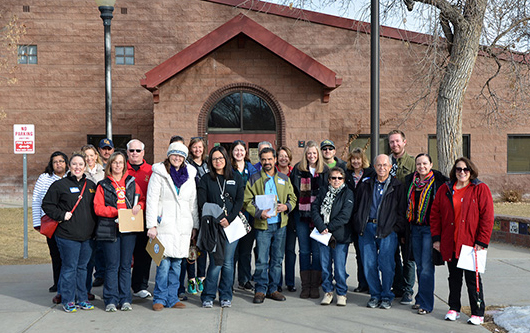 One year ago the Colorado IAF, Brighton Education Association and Northern Hills Church initiated an organizing campaign at North Elementary School, the lowest ranking of all schools in the 27J School District.  Over the course of the year, North demonstrated the largest improvement in academic scores of any school in the district and one of the highest in the state (see article below).  As a result, North changed its academic status from "improvement" to "performance."

Leaders initially began by developing individual relationships between congregational members and educators, and then reaching out to parents through neighborhood walks and pancake breakfast gatherings.  Together, they succeeded in establishing a before- and after-school care program for students and an intensive tutoring program that matched community volunteers -- mostly from Northern Hills Church, with students demonstrating the greatest academic need.  North Elementary staff additionally pursued internal changes including the reorganization of instructional teams and changes to the Master Schedule to better incorporate literacy and math blocks.

School-based leaders expressed pride over the dramatic improvement in academic achievement and gratefulness for the partnership with Northern Hills Chapel. 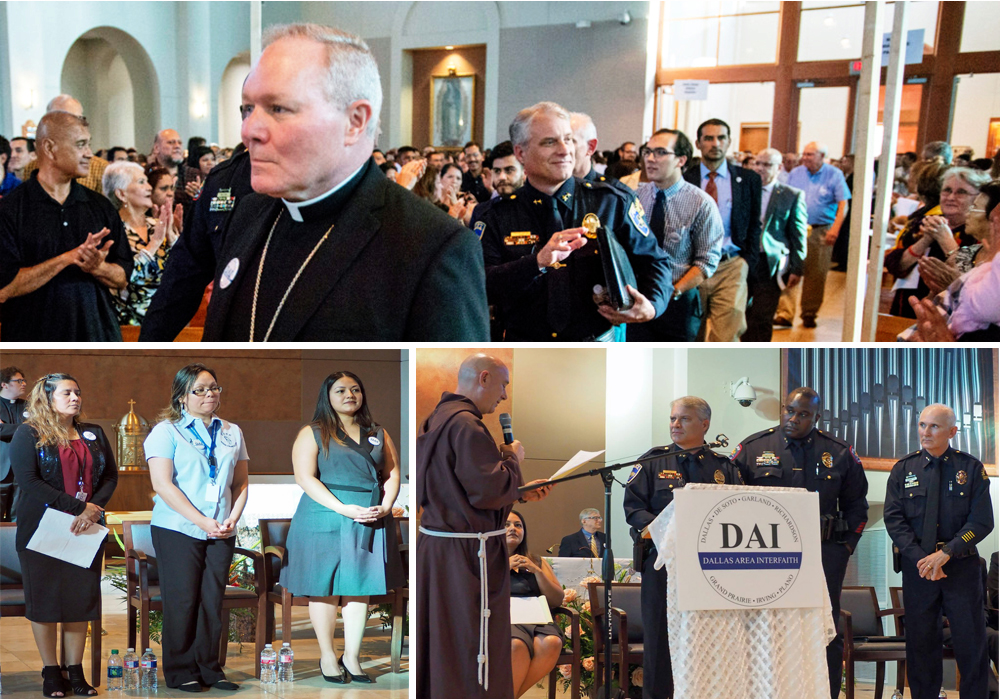 Sunday evening, hundreds of leaders were turned away from a sanctuary already overflowing with 1,500 Dallas Area Interfaith leaders at Mary Immaculate Catholic Church in Farmers Branch.  Nine years ago, the city of Farmers Branch was best-known for passing the first anti-immigrant law in Texas, which included fines for landlords renting to undocumented immigrants.  The police department paid a price in community trust -- one motivation for publicly pledging to accept parish IDs.

Catholic Bishop Edward Burns drew the most applause when he announced, "Jesus said whoever welcomes the stranger, welcomes me.  The Church as the mother will do whatever we can for the members of our immigrant community."

This approval will help the estimated 231,000 immigrants who call Dallas home.