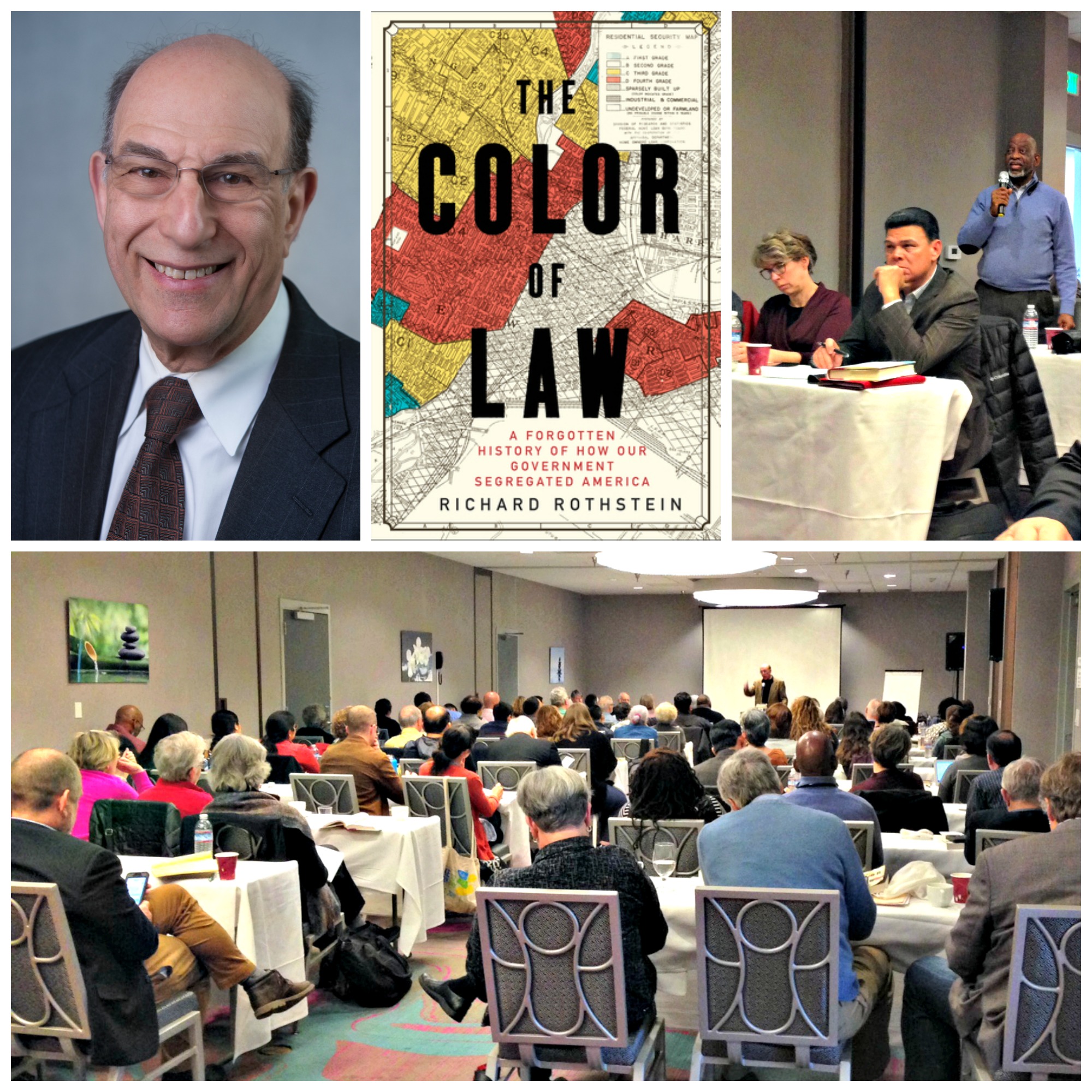 The Interfaith Education Fund hosted a seminar with Richard Rothstein to examine his latest book, The Color of Law, and the role public policy played in reinforcing, exacerbating and sometimes imposing residential segregation in America.  Leaders engaged with the text of the book, shared stories of local work and agitated each other (including the seminar guest) around what it will take to end racial segregation in the US. 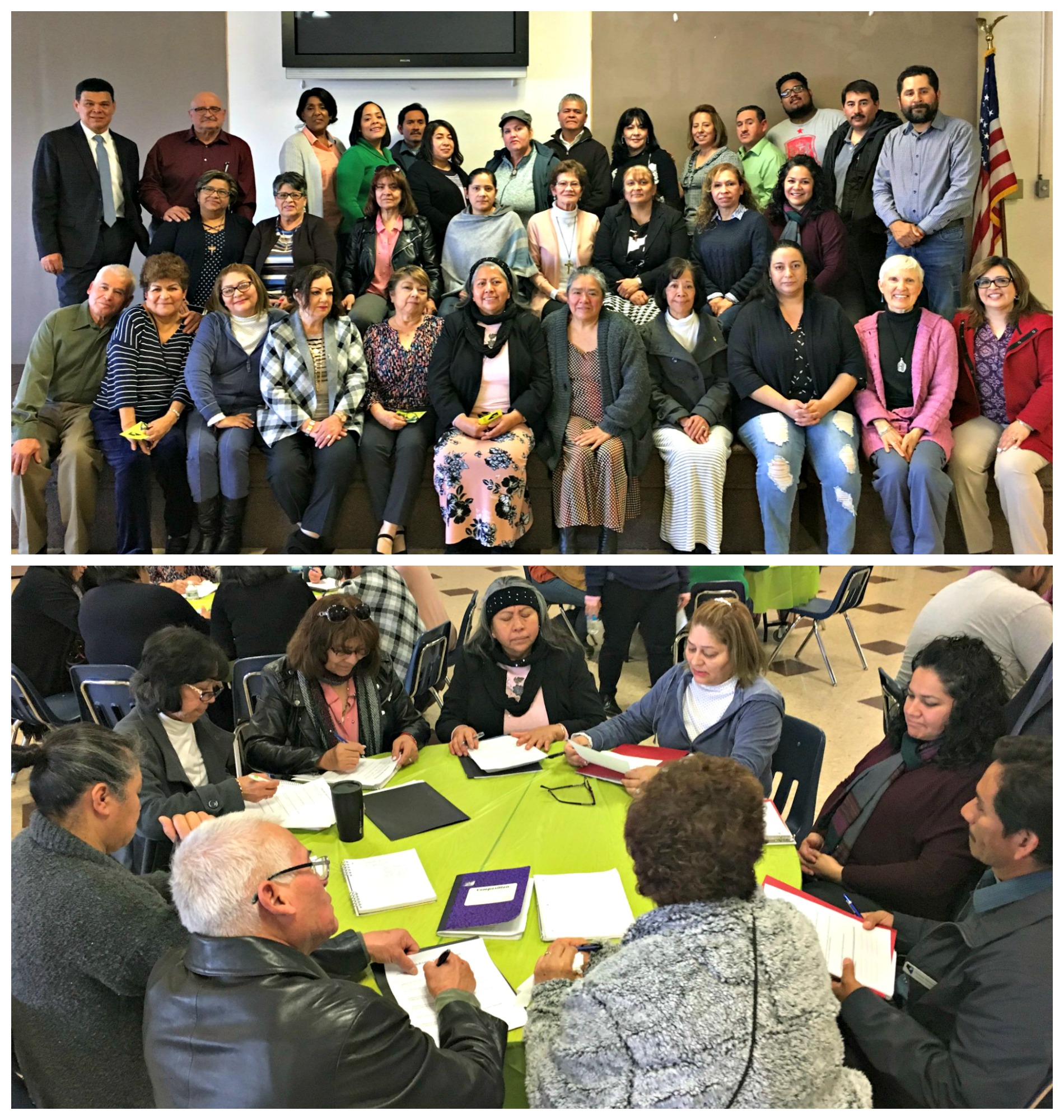 Organized with support from the Catholic Campaign for Human Development and the Organizers Institute of the West/Southwest IAF, the Recognizing the Stranger strategy continued in Nevada with the training of Spanish-speaking leaders from 9 parishes. 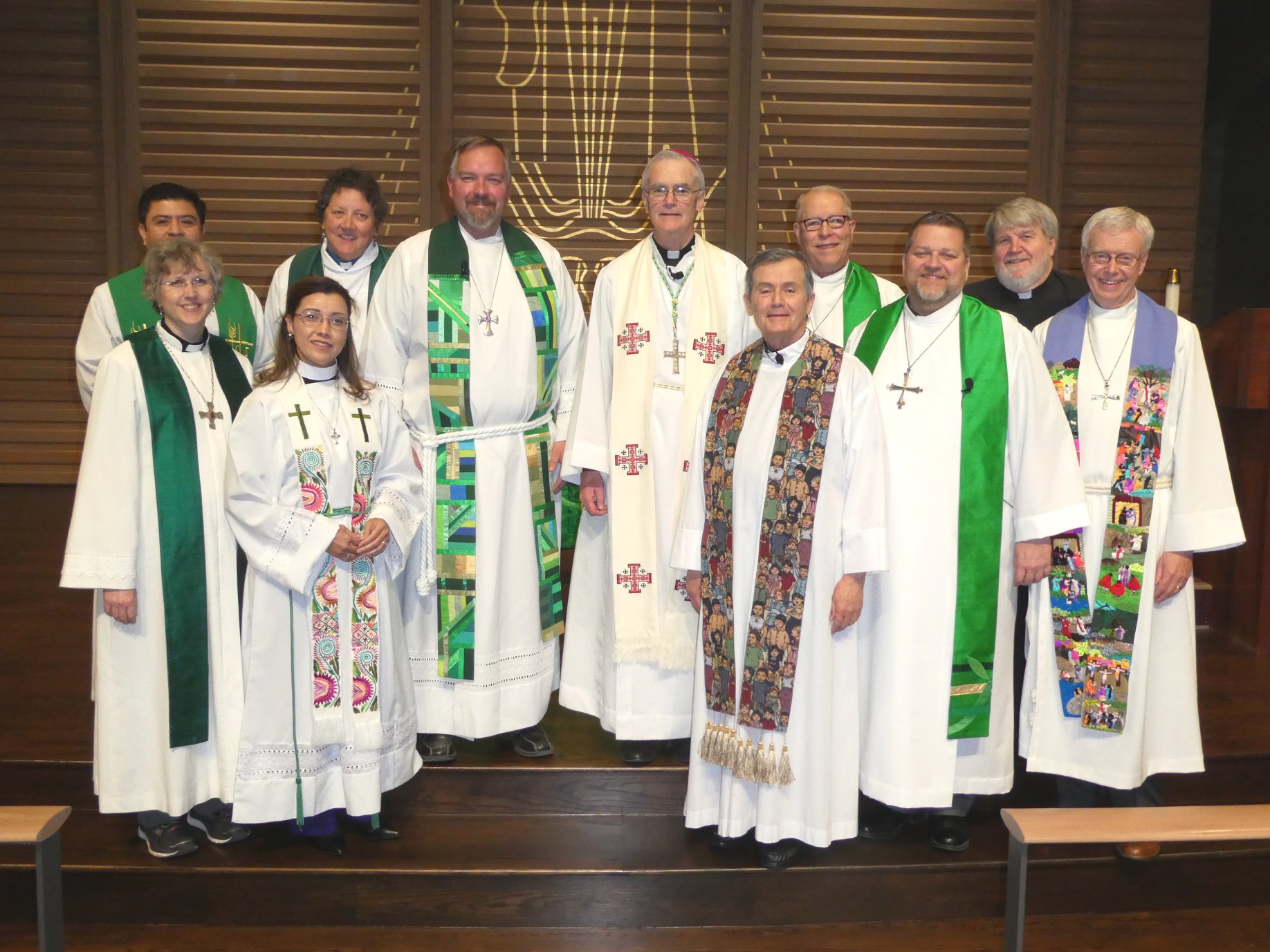 On Sunday, January 24th Dallas Area Interfaith, King of Glory Lutheran Church (ELCA), and Holy Trinity Roman Catholic Parish joined together for an ecumenical service of prayer and unity. Bishop Greg Kelly of the Roman Catholic Diocese of Dallas and Bishop Erik K.J. Gronberg of the Northern Texas-Northern Louisiana Synod (ELCA) shared the pulpit and other local pastors and leaders took part alongside combined choirs of the two congregations.

This worship marked the 2019 Week of Prayer for Christian Unity and the 500th anniversary of the beginning of the Lutheran reformation. Additionally this service marked 50 years of the Joint Lutheran-Catholic Commission on Unity called for by Pope John XXIII at the Second Vatican Council. The Pope then stated that the greatest scandal in the world were the divisions between Christian Churches.

We live in a time of deep political and social division in our nation. In these times of division the goal of this service was to celebrate our unity, the richness of each tradition, rather than our differences. To continue to work together to identify ways to impact our common good of our communities through shared listening sessions and projects.

A key component to this gathering was and is the work of Dallas Area Interfaith. For the past 25 years DAI has inspired numerous Dallas area institutions to work together following its core beliefs that people can listen to the needs of their communities and organize to impact the common good. These efforts have recently resulted in changes to the Dallas City Housing code; issuance of parish IDs, and better and stronger relationships with police departments. DAI is an instrument and institution that helps bridge the gaps between traditions and faiths, bringing people of faith together to serve.

This movement toward unity has now acknowledged that we can best partner by shifting our enthusiasm towards common prayer and works of mercy – work done together to help the sick, the poor, the immigrant, and the imprisoned. Pope Francis, along with Bishop Munib Younan of the Lutheran World Federation, marked the 500th anniversary of the Lutheran reformation in October 2017 in Lund, Sweden. On that occasion Pope Francis said “To do something together is a high and effective form of dialogue – we need to work together!” We celebrated that hope, to explore and appreciate the richness of our traditions on January 27th and we pledge to continue to work together. 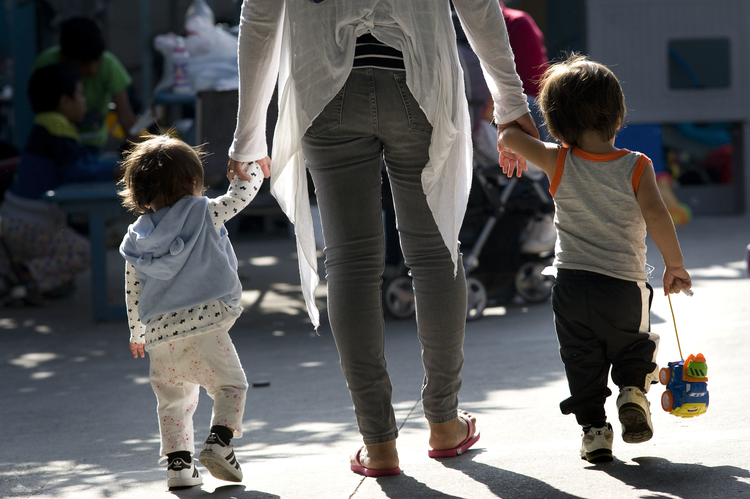 A newly released study from Stanford University demonstrates that the vitriolic immigration debate and crackdown in Arizona is harming unborn children through markedly lower birth weights and lower birth rates for immigrants.  Specifically, the study found that immigrant Latinas in Arizona who were pregnant during the debate over Senate Bill 1070, and gave birth in the six-month period between July and December 2010, had babies with lower birthweight compared with those in prior years.  Study author Dr. Torche said, “It is the fear itself that can have a negative effect on women.” The number of births among Latina immigrants in Arizona during the second half of 2010 also decreased.

“was meant to scare people out of the state. The intention was to turn us against each other, especially the ‘show me your papers’ dimension of the bill.”

Immigration enforcement laws of that time sowed mistrust and suspicion in communities, Mr. Rubio said, noting that a number of parishes in Phoenix saw Mass attendance and community participation plummet. Children would call their homes after school to see if it was “safe,” he said, explaining it was considered dangerous if police officers were in the neighborhood.

“Who’s going to report crimes? Mean-spirited legislation affects not only this generation but generations to come,” he said. “You are hurting citizen children, future workers and, from a larger perspective, you’re damaging the body of Christ. We pursue this type of fear-based legislation to our peril.” 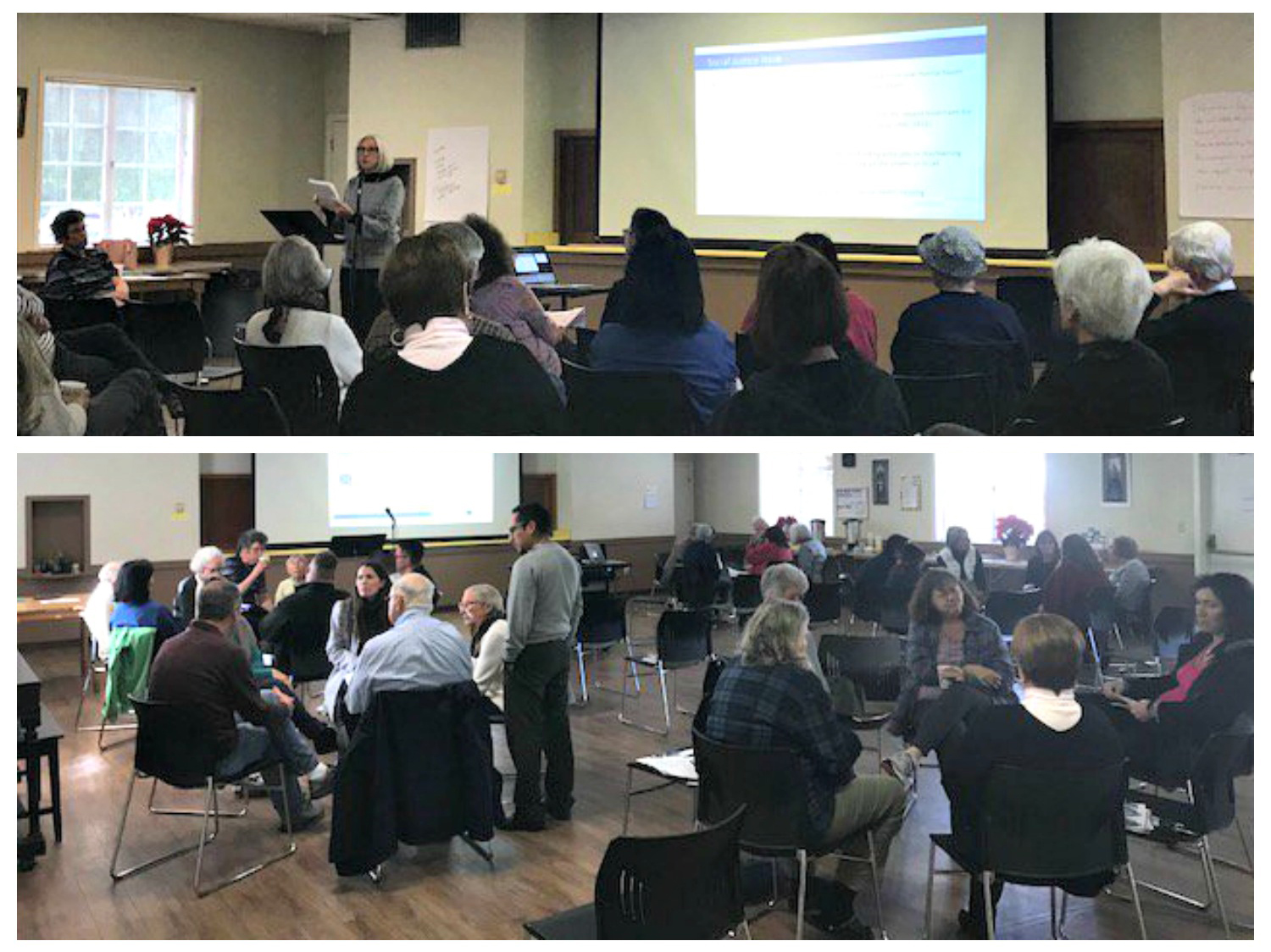 At COPA's 3rd Mental Health/Addiction Civic Academy, 40 participants gathered at Calvary Episcopal in Santa Cruz to learn about related stigmas and data gaps.  Carol Williamson, an Aptos UMC & NAMI leader, delivered the teaching after which participants shared their experiences of how mental health and addiction impacts their families.

Over 150 have participated in similar civic academies, so far, as COPA works to engage 500 people across Central California, breaking through stigmas and organizing a constituency for change. 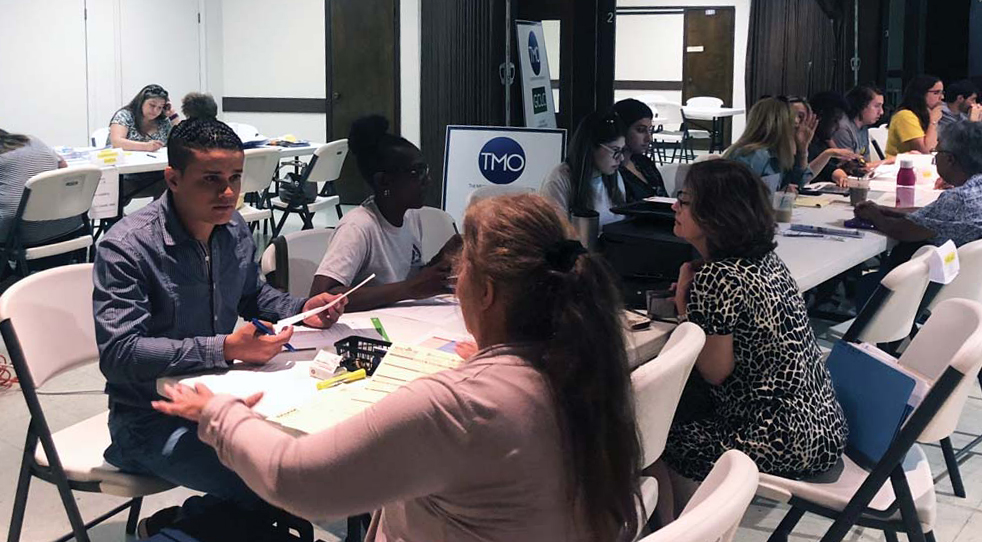 GCLC has hosted numerous Harvey Intake sessions at churches in North, Northeast and Southeast Houston/Pasadena to connect agencies with victims of Hurricane Harvey who are still in desperate need of assistance.

“The purpose of these intake sessions is to bring recovery resources to a targeted neighborhood and community,” Elizabeth Valdez, lead organizer with TMO, said. “While many Harvey survivors have become distrustful and disheartened by the recovery process, these sessions have offered a more hopeful approach by meeting survivors in their congregations. Over 300 families visited the sessions and approximately 80 percent did not have a case manager prior to these sessions. For many, this was their first face-to-face interaction with an agency.”

Sherry Dunlap, leader with TMO, said the organization hosts sessions at various churches and brings agencies to the people who are in need of home repairs. “Phones calls are made to seek churches who have people who have not received any assistance or did not receive enough support to get back in their homes,” she said. “Some of the people we meet with have unmet needs, therefore, we connect them with agencies who provide support.”

Dunlap said the organization also works to be advocates for the people they are serving. They have met before city council to seek more disaster case managers, with Mayor Sylvester Turner about disaster relief funding, and with Judge Ed Emmett about the bayous that would be included in the bond.

The organization plans to continue hosting sessions, which are coordinated in partnership with the Alliance for Multicultural Services, SBP, Wesley Community Center, Avenue CDC, Fifth Ward CDC, and other LISC Collaborative Members....

IAF Responds to Tragedy in Pittsburgh

The Industrial Areas Foundation (IAF) stands with the Jewish community in this time of tragedy, death, and fear. We condemn the horrific shooting at Tree of Life Synagogue in Pittsburgh this weekend and urge a cessation of the heated political rhetoric that is giving rise to anti-Semitism, white supremacy, and violence around the country.

Just over three years ago, 9 members of Mother Emanuel AME Church in Charleston, SC, also died practicing their faith. It is tragic that many faith communities are beginning to feel that they can only gather safely if they provide for armed deterrence from deadly acts of hate from guns and firearms. Houses of worship should not be places where people fear to assemble.

In the last 10 days, we have also seen a black man and woman killed in the Kentucky Kroger and numerous political and religious figures targeted for harm, including the mailing of explosive packages to numerous public officials. We denounce all these heinous acts and call for a response of justice and civility.

The Industrial Areas Foundation (IAF) is the nation’s oldest and largest non-partisan network of 75 Broad Based Community Organizations throughout the United States representing hundreds of thousands of families. We intentionally work in local areas to build a sense of greater community valuing diversity, pluralism, and acting together to build local democracy and public life. This week, we are supporting and organizing local gatherings and vigils of solidarity to stand with our Jewish brothers and sisters.

We know that the current polarized climate doesn’t have to be nor should it be normalized. We have demonstrated that people from diverse backgrounds can work together around common agendas that cross racial, ethnic, religious, political, gender and class divides. We are compelled to challenge all of us to stand with Jewish communities throughout the nation in this hour of horror and tragedy.

In this era of hyper-partisanship, we call upon our elected officials, from our nation’s capital to our local leaders, to work across party lines in a way that represents our interests and to stop using language that polarizes and encourages those who would use hate as a tool.

Over the long term, our work of organizing and community building for a common good continues. This requires tolerance and acceptance of disagreements from those with a broad spectrum of political and religious beliefs and traditions, and the acknowledgment that we are all responsible for forming a common public life.

We should never forget the words from the Book of Psalms:

Light shines in the darkness for the upright;
the righteous are merciful and full of compassion…
For they will never be shaken
the righteous will be kept in everlasting remembrance

With support from the Catholic Campaign for Human Development (CCHD) and Bishop Jaime Soto, Common Ground prepared 50 Spanish-speaking parishioners in the Solano Deanery for parish-based leadership.  The training was held over two days at St. Patrick-St. Vincent Catholic High School. 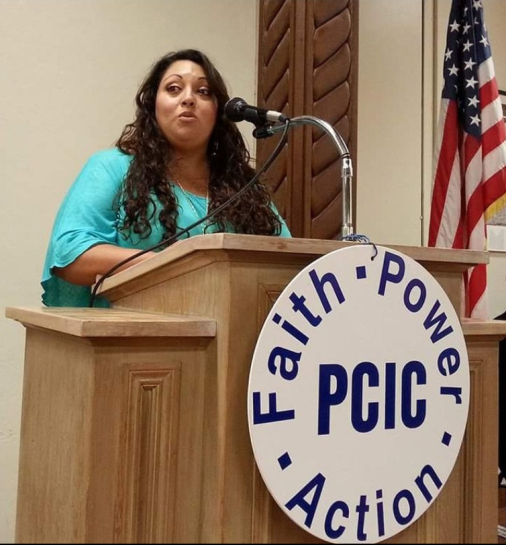 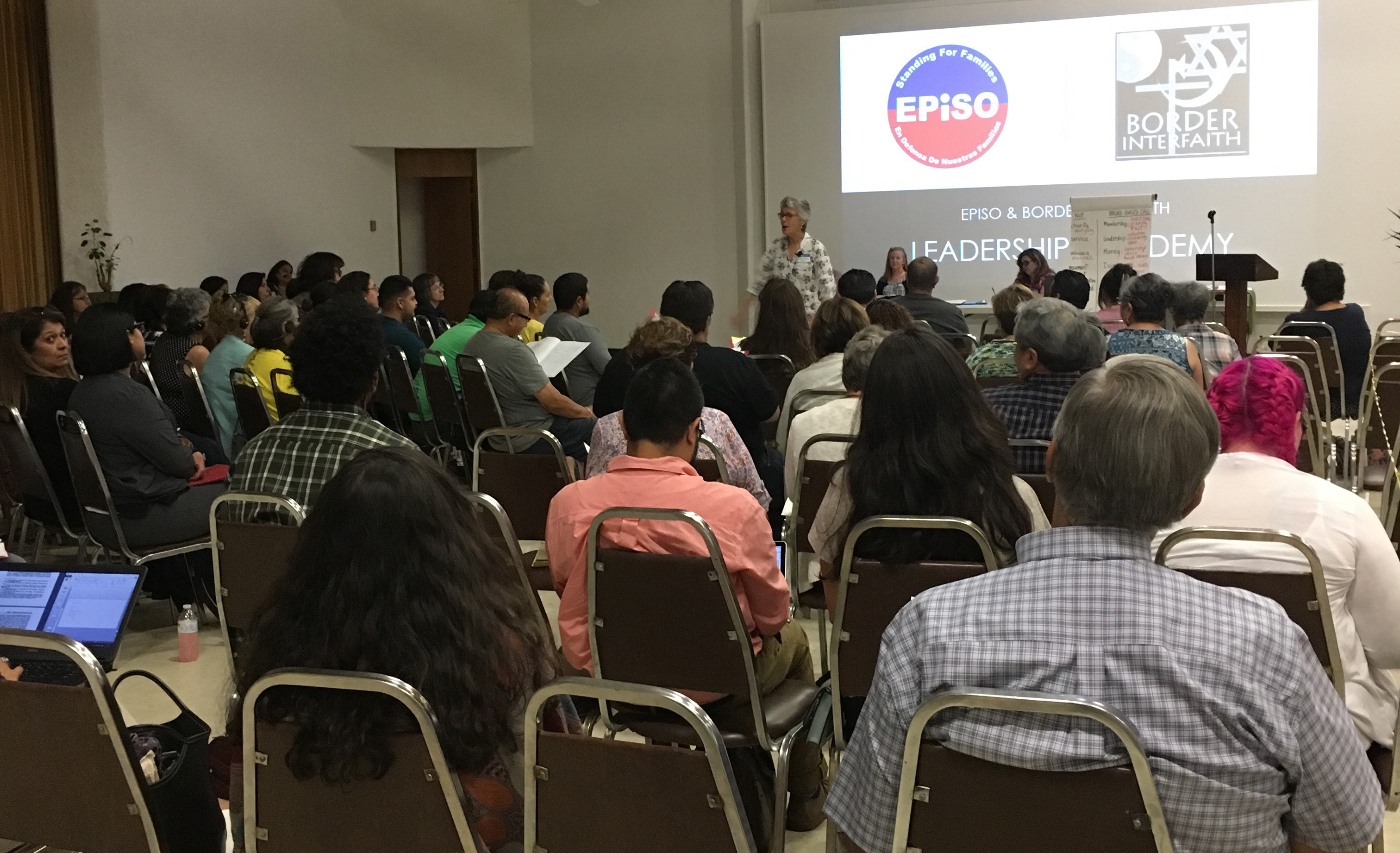 In the book of Amos, "we are reminded about the call to work for justice in this world. The EPISO-Border Interfaith Leadership Academy on June 15-16 at Christ the Savior Catholic Church in northeast El Paso provided a listening and learning opportunity to heed the call.  At the Leadership Academy, senior Industrial Areas Foundation (IAF) community organizers Sr. Maribeth Larkin and Joe Rubio offered participatory training on broad-based community organizing...."