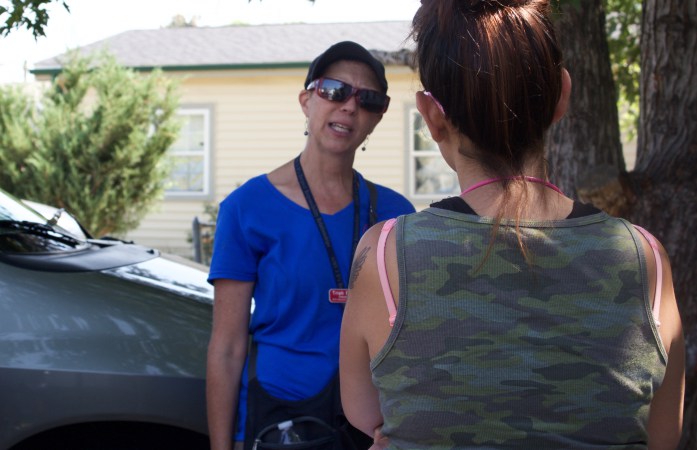 As part of a statewide effort by the Colorado Education Association, and in collaboration with the Colorado IAF, one dozen Commerce City teachers took to a nearby trailer park to directly ask parents how they can do their jobs better.  Many of the answers were blunt.  Teachers are working to rebuild trust in this community in order to reshape the schools to better address the interests and needs of the mostly low-income Latinos who live there.

Said Barb McDowell, "The only way we can make a difference with the families in our district is if we get involved." 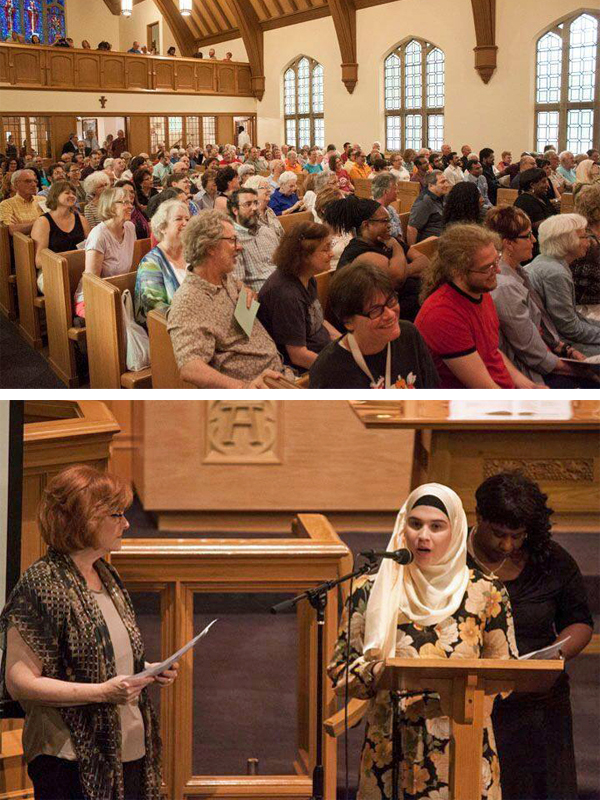 Over 240 Omaha leaders trained by the Institute for Public Leadership, plus allies from the Interdenominational Ministerial Alliance and other faith traditions, packed Augustana Lutheran Church for an Interfaith Solidarity Service.

The evening featured song, reflection and prayer from Christian, Jewish and Muslim faith communities and included statements of solidarity and a commitment to nonviolence.

As the most ethnically diverse parish in the Diocese of Fort Worth, St. Joseph’s Catholic Parish in Arlington, Texas holds mass in four languages: English, Spanish, French and Twi.  Over the last two years, in partnership with the Dallas Area Sponsoring Committee, the parish has undergone a deeply embedded congregational development process involving 3,000 parishioners – 600 of which participated in small group conversational encounters held by 80 ministry leaders.

Subsequent congregational development meetings integrated Catholic Social Teaching into training sessions on leadership, stewardship and responsibility to the common good.  These meetings consistently drew 200 at a time.  As a result, new leaders soon emerged for the pastoral council and other parish ministries.  There is now clarity about the need to build a stronger parish community and attend to the challenges families face.

In November, after leaders heard weekly “horror stories” about the debilitating effect of predatory loans on families, St. Joseph’s Catholic Parish stood with the Texas Conference of Catholic Bishops to publicly launch a campaign calling on the City of Arlington to better regulate payday and title loan lending.

Father Tobi Guerrero, pastor of St. Peter the Apostle Catholic Church in Laredo, Barrio Los Cuatros in Southwest Laredo, the most neglected neighborhood in Laredo, has initiated a parish development process in his parish.  He began with six two-hour training sessions on evangelization based on the great commissioning: to make disciples, understood as creating relationships of solidarity with the people of the community, especially the most isolated, such as undocumented people; to baptize, understood as inviting all the people of the neighborhood to be one community that stands together to work together to address the issues that everyone faces; and teaching them all things, understood as identifying and training new leaders for the neighborhood.

The training sessions have prepared 36 leaders who are divided up into 18 teams that will go out and engage the community around issues that affect the common welfare. These 18 teams have committed to meeting with the families of 90 city blocks (5 blocks per team). The evangelization teams went out to meet the people of the community on the first of two Saturdays on October 3, to find out who is living in the community, to ask people about the issues they face in their neighborhood, and to invite them to participate in small group meetings at the church to develop a comprehensive community agenda on which they can take collective action.

When parish leaders of Our Lady of Guadalupe Mission from the Diocese of Alexandria, Louisiana learned that nursery workers were traveling to Dallas for basic immigration services, they turned to Northern & Central Louisiana Interfaith (NCLI) for help.  NCLI urged the Catholic workers to carefully invest in relationships with Anglos and African Americans – including Baptists and Methodists.  The workers responded.  At a monthly convening of mostly Black and White leaders, one immigrant shared that he felt caught between providing for his family and breaking immigration laws.  In response, an African American gentleman revealed that he had grown up on a plantation speaking only Creole, and that when he started school in the city he and his siblings were treated as strangers due to their accents and ways.  This encounter created the basis for trust –sufficient to work together not just in the founding of a local immigrant center, but also around reforming police practices to stop racial profiling. 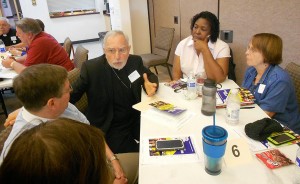 Bishops Gerald Kicanas (Roman Catholic), Kirk Smith (Episcopal) and Stephen Talmage (Lutheran) gathered before a crowd of 60 clergy in Tucson to inform them of ways congregations can work together for the common good.  Bishop Kicanas shared his own experience of attending an IAF leadership training institute and suggested that clergy would be “well-served by attending similar trainings this fall in Phoenix and in Yuma.”

Lutheran Bishop Talmage concluded the session with with an invitation to the clergy to do listening sessions in their congregations and focus on the development and training of young leaders to both transform their communities and their parishes.  The event was put together by the Pima County Interfaith Council and the Arizona Interfaith Network. 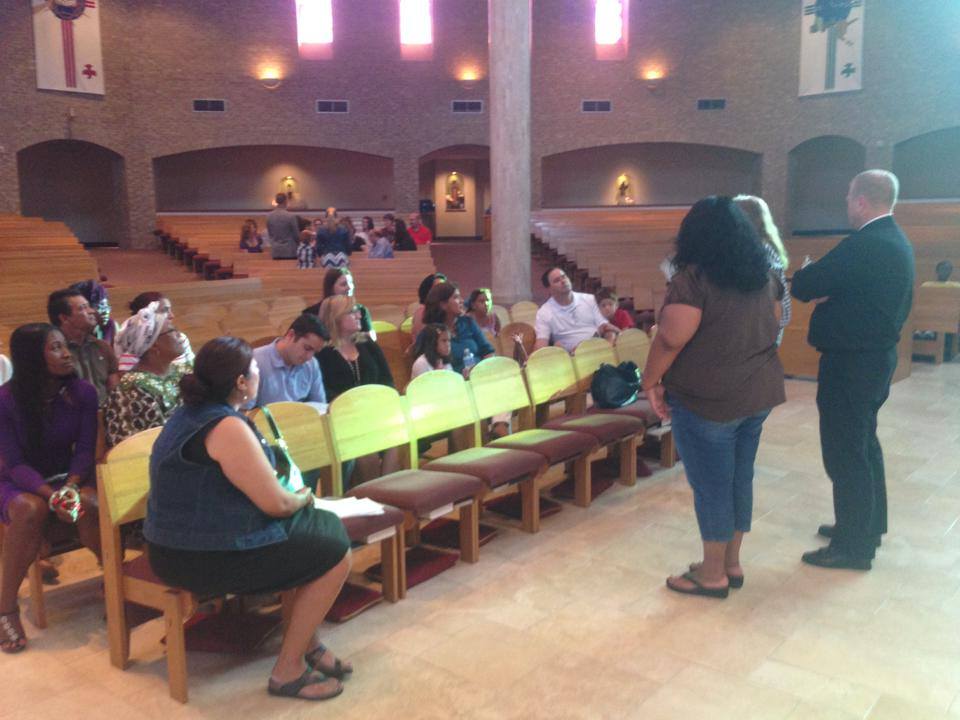 In an effort to engage face-to-face with parishioners in one of the most ethnically-diverse parishes in the Diocese of Fort Worth, congregational leaders of St. Joseph Catholic launched a weekend-long house meeting campaign that drew 546 people into conversation.  After each mass, parishioners were invited to stay an additional 30 minutes to get to know others in their congregation; multiple conversations were held in the circular sanctuary.

Congregational leaders who form the parish development team used the listening campaign to jump start their parish development process to hear concerns and identify new leaders for the church.  The intent is to “develop disciples to live out the mission of the church in the community.”  Leaders heard stories of unemployment and isolation.  They also heard from parishioners who wanted to join certain ministries but had never been asked!

This action is part of a larger campaign to strengthen the institutions of Allied Communities of Tarrant in the Fort Worth area; a house meeting event years prior drew 300.

In 2014, five years after the foreclosure crisis had wiped out immigrant homeownership in Assumption Catholic Church in Monterey County, California, a new scam threatened the parish.  Targeting low-income, Spanish speaking residents in Catholic churches, an unscrupulous group signed up thousands of predatory lending victims (at the price of $1,250 a head) for a lawsuit against the banks that defrauded them.  The group had no real intention of seeing the lawsuit through.

However, unbeknownst to these characters, the leaders of Assumption had undergone in-depth parish leadership development, the result of which was a strong and vibrant team of new leaders who, from COPA, had learned to secure lighting in the parish neighborhood, sign up residents for expanded Medicaid and expand healthcare access for undocumented residents of Monterey.  Having developed confidence in their own competence, upon hearing an announcement about the lawsuit at mass, these COPA-trained leaders immediately moved into action.

They stopped the predators from recruiting at their parish, alerted the Diocese of the danger to other Monterey County parishes and went on to persuade the County District Attorney to assign an investigator to the case.  Through their training and experience, the parish leadership of Assumption was able to protect fellow parishioners and save thousands more families from being re-victimized.

VIP Education Fund Expands Financial Base of Congregations in Phoenix

During the onset of the Great Recession, Valley Interfaith Project Education Fund in Arizona worked with two central Phoenix parishes, St. Agnes and Most Holy Trinity, on parish leadership development and training.  At both parishes, sizable influxes of immigrant families were challenging the pastors and parish leaders with how to deal with two quite distinct communities under one roof.

Through a patient series of training sessions which examined the relationship of the church and its leaders to the parish community, key members of the Latino and Anglo communities began to build relationships, evaluate their collective responsibilities to the parish, and initiate parish wide conversations around stewardship and the importance of parish membership and registration. Both parishes saw important gains in registered membership, participation in stewardship, and an appreciation among parishioners of the public role of the parish, particularly in defending the rights of the immigrant community.  St. Agnes, an inner city parish, doubled its registered membership and added thousands to its weekly collections.